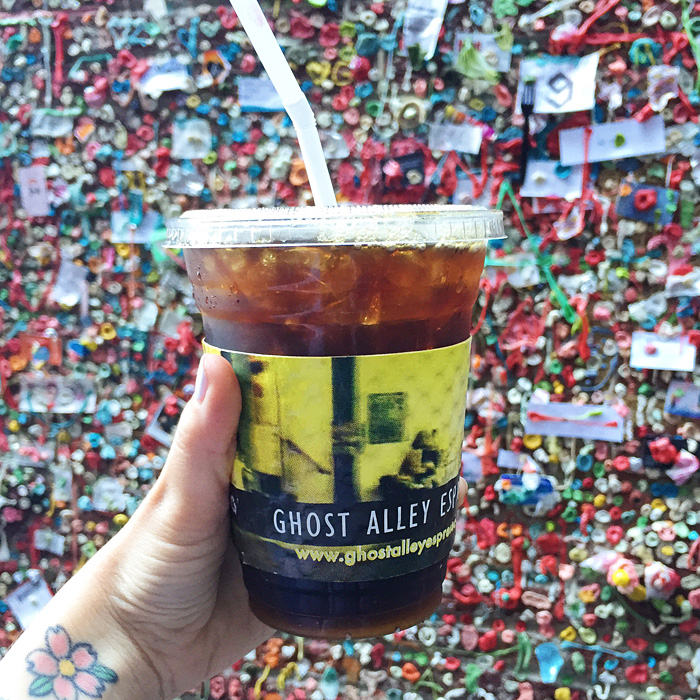 It seems like I’ve been spending a lot of time at Pike Place Market lately. In all honesty, with or without being invited to attend events there, I do spend a lot of my free time there. It is one of the few places I’ve been to that acts not only as a tourist attraction but as a local attraction as well. The food in the market is legitimately good! I’ve been to a handful of countries and states in my travels, and whenever I visit somewhere new, I always avoid eating near the tourist attractions. The food always tends to be mediocre at best BUT Pike Place Market, and it’s vendors take pride in their craft, and everything is always so fresh and delicious.

I was recently invited to join a Pike Place Market Food Tour by a local company called Savor Seattle. Since the weather has been so fantastic lately, I felt this was a great excuse to get out of the house and take a little morning break. To be completely transparent, I did not pay for the tour. But as always all of my opinions are my own, and I would not want to lead my fellow food lovers astray!

The tour group met down Post Alley right past the gum wall. Which is impressively full, considering it was cleaned for the first time in 25 years just a few months ago. I decided I hadn’t sufficiently caffeinated myself that morning, so I popped into Ghost Alley Espresso for a refreshing cup of cold brew (not included in the tour).

Soon after our tour guide LeRoy (you can find tour guide bios here) walked us through a brief intro, an ice-breaker and then led us on our Pike Place Market adventure.  The tour is approximately 2 hours long, and we stopped at 7 different vendors. 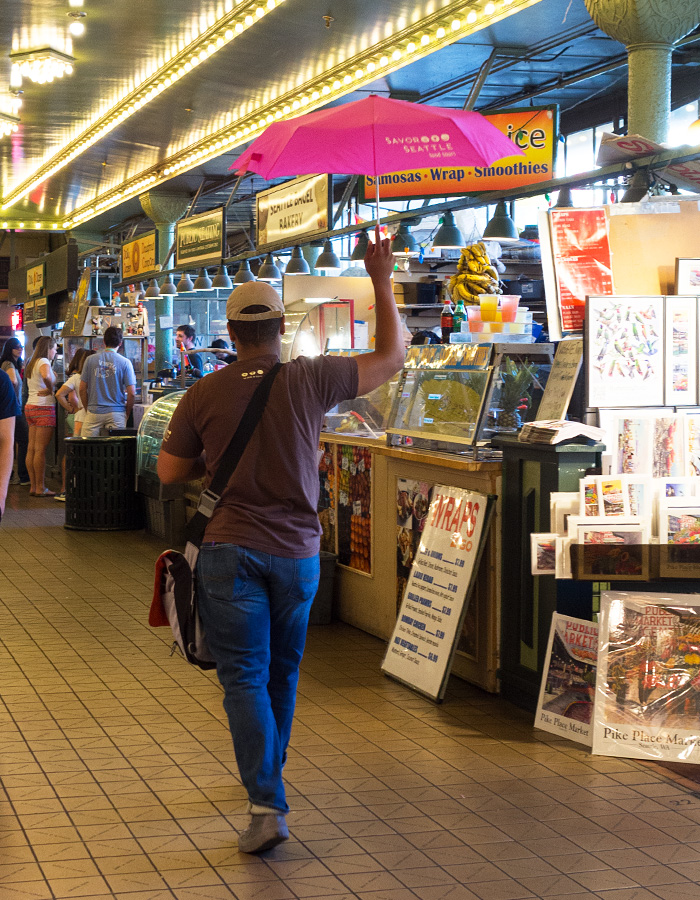 We followed the pink umbrella to our first stop which is a personal favorite of mine, Daily Dozen Doughnut Co. They offer freshly made mini-doughnuts. They are melt-in-your-mouth good! We had two generous bags filled with these mini pillows of delight to share with the group. I noshed on two of the cinnamon & sugar, knowing that I had to save my stomach for the rest of the tour. One thing I did not know about the Daily Dozen is that they give away any remaining doughnuts at the end of the day to the less fortunate. I just love the fact that they do not waste a single morsel of food. 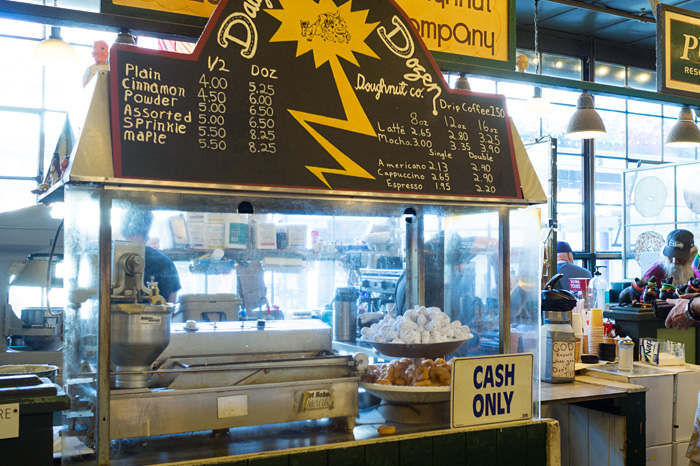 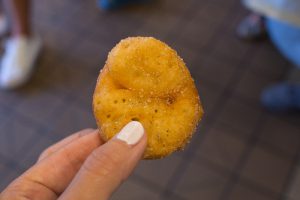 The second stop on this tour brought us to Ellenos Real Greek Yogurt, which happens to be a favorite staple in Seattle. I always describe the yogurt at Ellenos as a less sweet cheesecake. It’s so rich and creamy. Plus the fruit topping makes for a nice touch of sweetness without being overpowering. We tried the passion fruit and marionberry which are both fantastic. 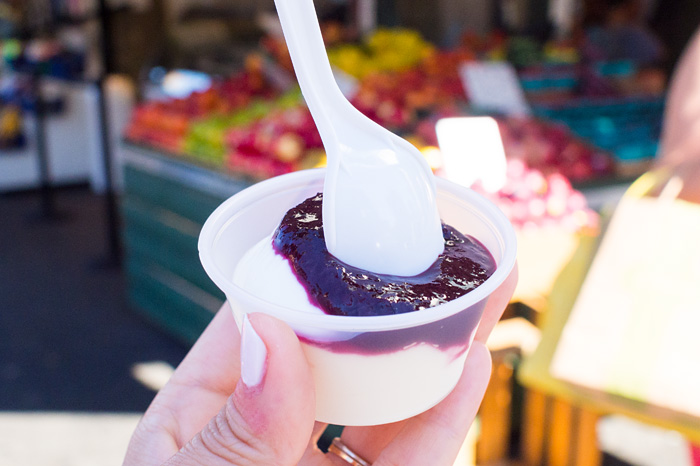 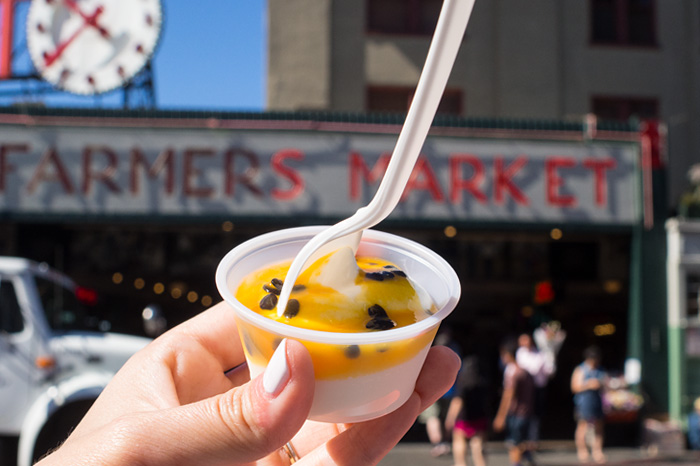 After this, our guide LeRoy gave us a little history lesson on Pike Place Market that I never knew. During the 40’s a large percentage of farmers in Seattle were Japanese-American but because of WWII many of them were sent to internment camps. As an homage to these citizens who never returned to the market, there was a mural created right underneath the entry sign. My photo below does not capture the mural well, so I would encourage you to go check it out for yourself. 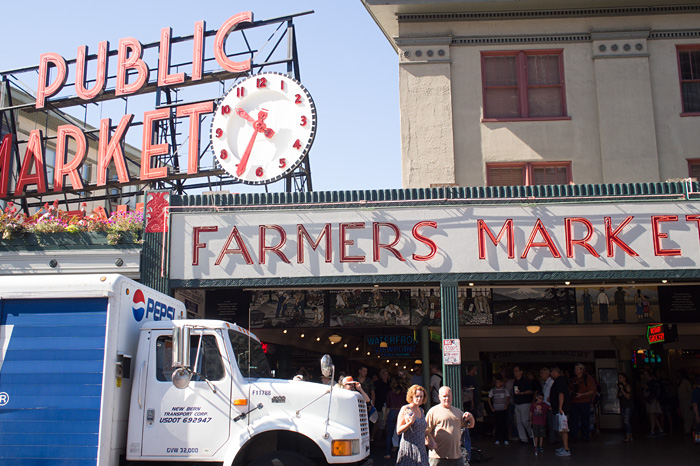 The third stop on our eating extravaganza was Beecher’s Handmade Cheese. We had SO. MANY. SAMPLES. Seriously, I almost KO’d here. At one point they were handing out cheese curds, and I thought I was grabbing the smallest one. But alas, my curd was halfway stuck under a pile, and I ended up grabbing the largest! We also sampled the flagship cheese and their famous mac and cheese. Since the group was so small, there were plenty of extras to go around. 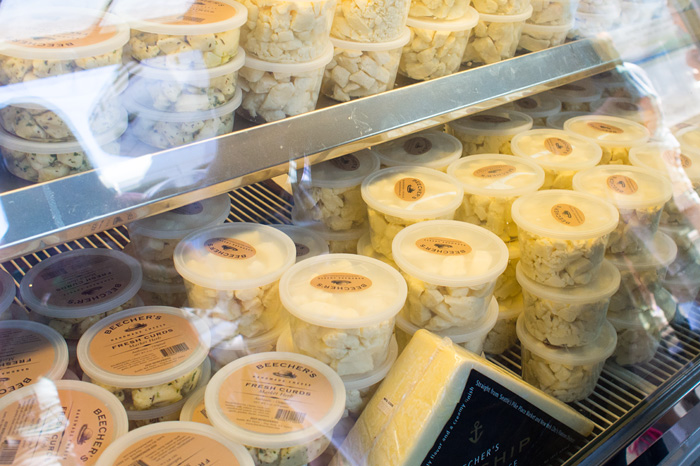 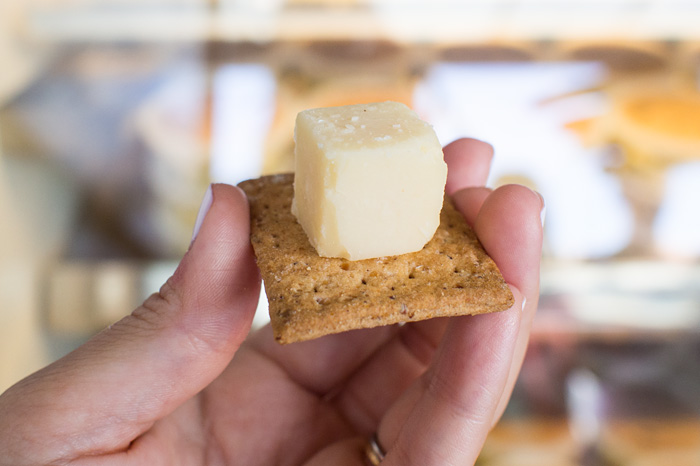 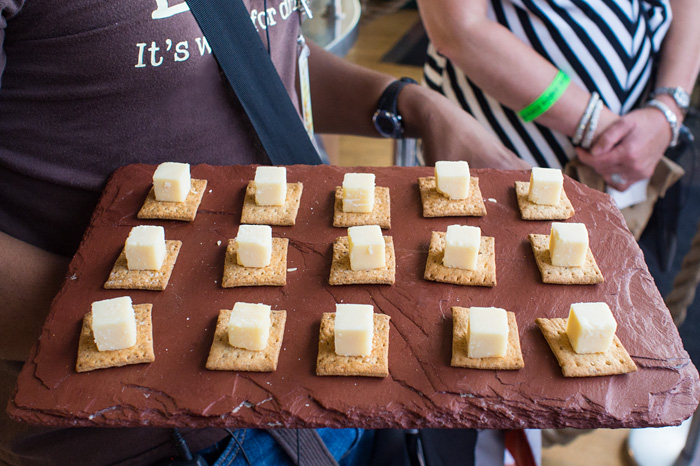 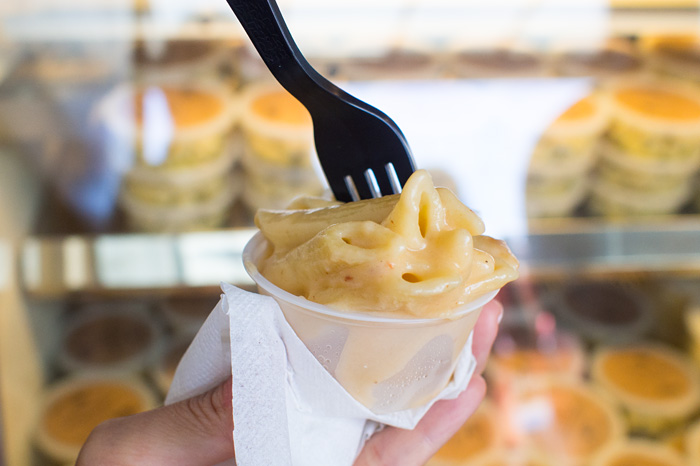 Next, we headed to the bustling market to try some tasty bites from Chukar Cherries. This was my first time sampling their handmade snacks and candies. One surprising item was the cherry salsa. It was so good! The mix of savory, sweet and spice was a perfect balance. I could totally imagine myself chowing down on this during a Seahawks game. We also sampled other various cherry offerings, all which they farm themselves. 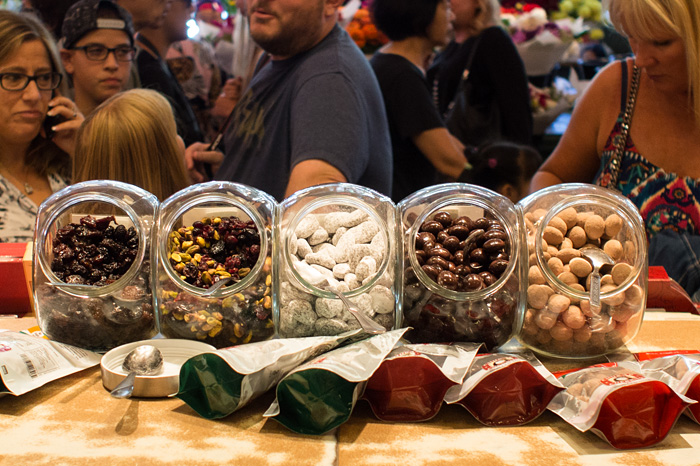 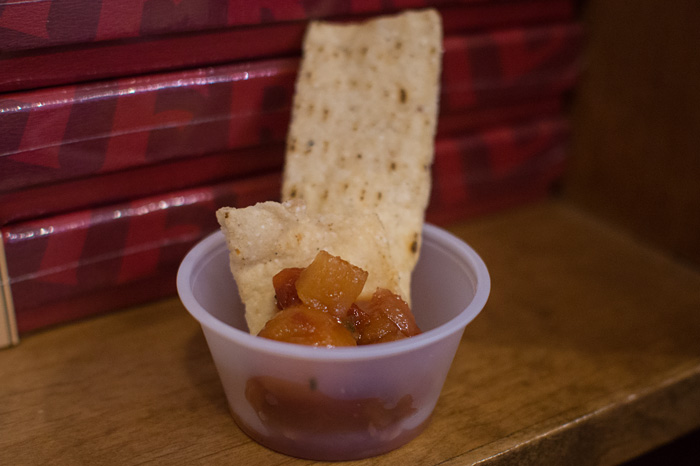 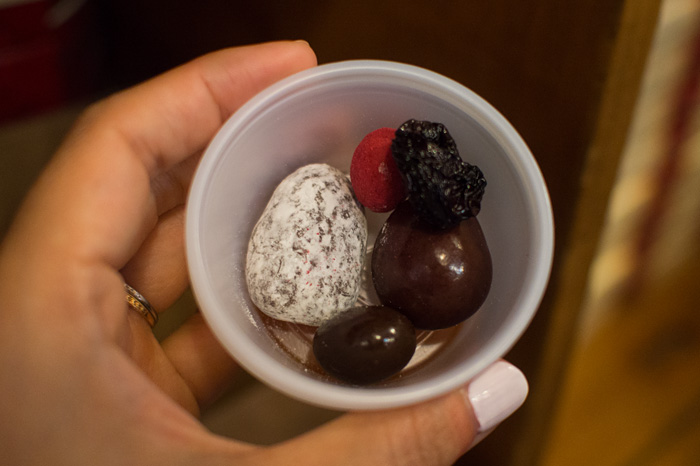 So I believe we are on stop five now, which took us to Piroshky, Piroshky Bakery. Because of the enormous line this food stall always has, I’ve never tried their delicious Russian pastries. I have been missing out! This apple cinnamon roll was to die for. So soft and layered with flavors. We also had a chance to sample a savory meat piroshky as well but at this point, I was about to burst, so I left my sample to my fellow tour mates. 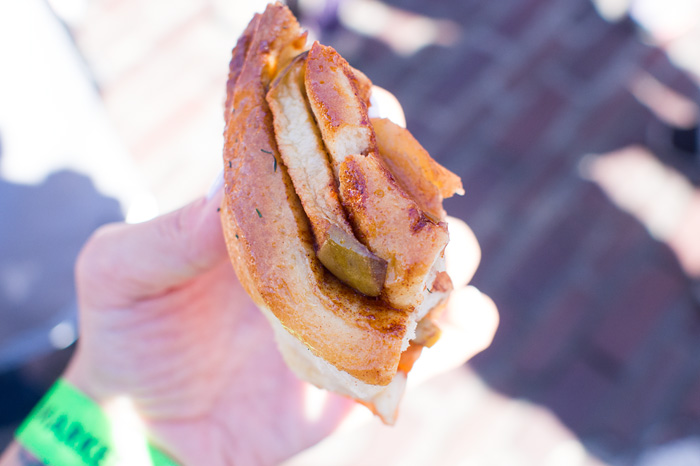 The next stop took us to Pike Place Chowder, which any good Pike Place Tour must visit. The best part of this stop (besides the chowder) was not waiting in line. We got VIP treatment and had our samples waiting for us right after we arrived. 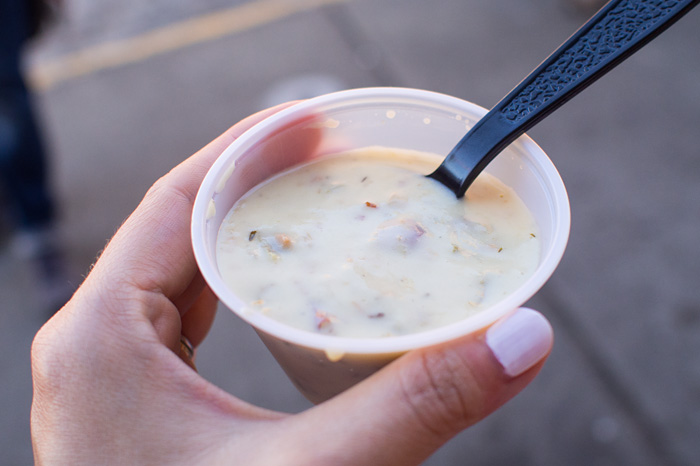 The last and final stop on our epic Savor Seattle Pike Place Market Tour was the Tom Douglas eatery Etta’s Seafood.  Here we got to try their best-selling crabcake, and like our guide LeRoy told us, I found it filled to the brim with crab and very little fillers. 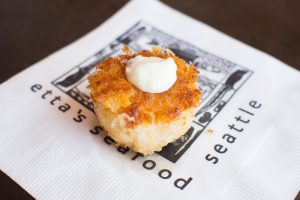 I enjoyed my morning on the Savor Seattle Food Tour. With prices starting at $42, I would easily spend the extra few dollars to do this versus the Duck Tours, which are around $35 a person. But then again I LOVE food. What I enjoyed the most about the tour was the upbeat personality of our tour guide and all of the fantastic historical knowledge he shared. For someone who lives in Seattle and frequents the market, it brought a newfound respect and admiration for this lively attraction.
Another thing that I thought was cool was Savor Seattle partners with a lot of local restaurants and gourmet snack shops to offer it’s guests 10% – 15% discounts. So you can keep feasting all day long.
I hope you enjoyed this post! Please feel free to comment below, with any of your favorite eateries in the market or leave me a message on IG.
Cheers,
Sonya
Neighborhood: Downtown
Price: $$$

Rock Out in the W Seattle Sound...

This looks like such a fun tour!! Will have to tell my mom about this one since she is the foodie! Great tour photos!!

Hi! Great blog! Would you be interested in writing up our award winning mexican restaurant in southcenter? Please email me at apackdesigns@gmail.com for details. Thanks! 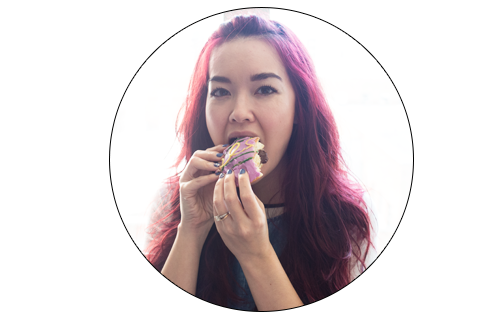